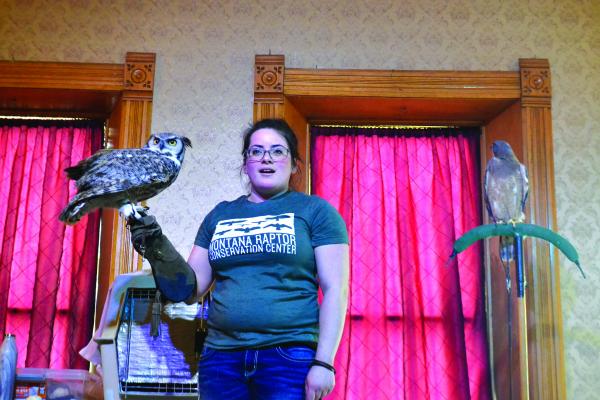 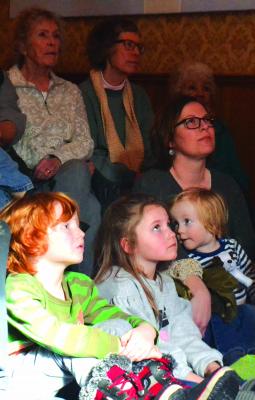 VIRGINIA CITY—Residents of Virginia City, Alder and Ennis got a visit from some special guests on Saturday, February 2, although they weren’t groundhogs as the day would suggest. In fact, they would probably happily eat a groundhog for breakfast.

Teresa Aldrich of the Bozeman-based Montana Raptor Conservation Center came to the Elling House Arts & Humanities Center to speak to a packed house about the types of raptors that live in Montana, their roles in the Rocky Mountain ecosystem and the best conservation practices to protect the special birds.

There are six primary types of raptors in Montana, Aldrich said: owls, osprey, hawks, eagles, falcons and vultures. Three of those species made special appearances at the Elling House to help with the presentation.

Aldrich began by explaining the primary identifiers of raptors—the elements that set them apart from other birds in Montana and the western United States. Primary among those identifiers are the birds’ talons and beaks, both of which are longer and sharper than most avian species due to raptors’ primary diet of meat, such as mice, voles and in many cases, other birds.

Raptors are also notable for their extremely sharp eyesight. Aldrich used her first avian ambassador, a Swainson’s hawk named Chaco, to demonstrate, telling the crowd that if Chaco were to sit atop a skyscraper, he’d be able not only to see a rabbit a mile away, but would be able to see each inhale and exhale the bunny took. If that rabbit were a quarter mile away, Chaco would be able to count his whiskers.

Chaco, like all of MRCC’s ambassador birds, cannot be released into the wild. The hawk suffered from a genetically malformed humerus bone in his left wing, leaving him unable to fly or hunt effectively. He was brought to the center as a hatchling and has been a permanent resident and educational assistant ever since.

A particular threat for hawks like Chaco, Aldrich said, has historically been pesticide use. Swainson’s hawks can migrate from southern Canada as far as Argentina each winter, traveling up to 100 miles a day. As they traverse Central America, the birds feast on grasshoppers and other insects in agricultural fields.

During the 1990s, the spraying of DDT meant that as the birds snacked on insects in those areas, they ingested the pesticide, which inhibited calcium absorption. That, in turn, led to weak, poorly-formed eggshells and the wiping out of nearly an entire generation of the species.

However, since the birds are such great natural pest-eaters themselves, Aldrich notes that farmers caught on quickly to the impact DDT was having on the Swainson’s hawks. DDT use dropped quickly, and the birds were able to munch insects to their heart’s content, earning them the nickname “farmer’s friend.”

Aldrich’s second avian ambassador was Bu, a Great Horned Owl who had been imprinted on humans as a chick. Owning a wild raptor is illegal in Montana and can result in fines and even jail time in some instances. Aldrich said that because Bu had become so acclimated to humans, not only was he unafraid of people; he didn’t really understand that he was an owl. He relies upon people for food, unable to hunt for himself, and even makes mating calls to some of his keepers, while unimpressed by female owls brought into his enclosure.

Bu demonstrated the iconic visual mobility of owls for the gathered crowd: 270 degrees of visibility thanks to 14 vertebrae in his neck, twice the number of humans and most mammals. Owl eyes don’t move at all, Aldrich says, which is what makes the mobility of their heads to important. Their eyes also make up about 5 percent of their body weight and take up two-thirds of the space in their skulls, said Aldrich. If human eyes were proportioned thus, they’d be the size of tennis balls and would weigh between five and 10 pounds.

The final raptor guest on Saturday was Stella, a tiny kestrel of about 10 inches tall. A breed of falcon, kestrels may be small but they’re mighty: in the wild, Aldrich said, Stella would find most of her food by hunting birds smaller than herself. Her talons are proportionally longer than most raptors, long and thin like needles, to offer her greater leverage when wrangling her food.

Due to their size, kestrels are cavity nesters, Aldrich said. They don’t create their own tree cavities, though, instead taking over old squirrel or woodpecker holes in tree trunks to blend in. Too few spaces to live are a threat for kestrels, Aldrich noted, so an easy and fun way for Montanans to aid in their conservation is to install nest boxes on their properties for kestrels to live an lay their eggs in.

While the MRCC is not open to the public, Aldrich says, they’re the ones to call in the case of an injured raptor. The most common causes of raptor injuries are inadvertently ingesting animal poison and being hit by vehicles, so timeliness is key in getting the birds the medical assistance and recuperative measures they need. The Center also puts on an educational series in the summer, which is free to the public and offers tips on how best to cohabitate with Montana’s raptor residents.