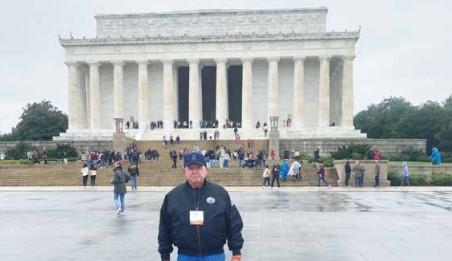 Richard, aka Dick, Barr of Ennis, a Vietnam Veteran, could not hide his emotion when speaking of what he called “the most rewarding week of my life”. The week of Sept. 30, 2022, when Barr was invited to join his fellow soldiers on an Honor Flight’ is what he was speaking of. It was the grace and gratitude he was shown for his service to the country, along with the company of fellow soldiers, (some in memory only) however, that sparked the crack in his voice.

Barr, a graduate of the University of Montana, ‘got his wings’ in 1968 and became part of the ‘Seawolves’ stationed on a helicopter gun ship. Sadly, his helicopter was shot down on March 23, 1969, just one day after his twenty-seventh birthday. “My co-pilot was shot and killed… lost a door gunner,” he explained. Then his voice rose slightly, “But we happened to have a Navy Seal with us that day, he saved our lives!” Barr was shot through the leg, his crew chief through the arm, but the Seal, using Barr’s .45, confronted the enemy and got them out alive. Barr didn’t give much more detail of his time serving the United States, but it was more than enough to know that the honor he felt during his trip to Washington DC was well earned and likely, well overdue.

Honor Flight was formed in 2005 by Jeff Miller and Earl Morse with a mission of honoring our nation’s veterans by bringing them to Washington, DC to visit the memorials and monuments dedicated to their service and sacrifice. (honorflight.org) Originally focused on honoring World War II veterans, they now also honor those who served in the Korean War, Vietnam War, intermediary operations, and in special cases of terminal illness or injury, veterans from more recent service eras. Honor Flight has taken more than 245,000 veterans to Washington D.C. It is comprised of over 128 hubs throughout the country and serves over 22,000 veterans each year.

Barr began his journey by going to San Diego where he and his fellow veterans were given a memorable dinner from Phil’s BBQ and hotel room to await their morning flight. Upon boarding the Alaskan Airline plane flew them to Baltimore, each honoree was given two packets. The first packet contained thirty letters from students of an East Texas school, thanking them for their service. The second packet contained letters from family and friends. “It was a tearjerker,” Barr said woefully. But I could hear the smile in his voice.

As the Honor Flight landed in Baltimore, fire engines on each side escorted it to the gate, showering the plane with an honorary waterfall. Commander Barr and his fellow veterans were whisked away to a military style dinner with drinks and guest speakers and, I can only imagine, touching conversations.

In the Capital, Washington D.C., the honorees’ first stop was the Tomb of the Unknown Soldier where they watched the hour-long ceremony and changing of the guard. The WWII, Vietnam and Korean Memorials followed. The tour ended with stops at the Navy and Washington Memorial.

Barr, who once owned the Silver Tip Hotel and recently retired from a thirty-three year long career in his tree service business, spoke of this trip with the gentle excitement of a shy kid on Christmas morning. He recommended that anyone who got the chance to participate in Honor Flight to take advantage of it. But it was the telling of his arrival that struck me. Waiting for the veterans were a thousand to fifteen hundred people cheering and holding signs! “Civilians, family, Girl Scouts, and Boy Scouts… it felt like a fifty year [old] thank you” he said. Again, I heard the smile in his voice. Serving our country counts, but gratitude when coming home, even decades later, matters.

Thank you, Commander Barr, for your time to share this story. And on behalf of The Madisonian staff, Happy Veteran’s Day and thank you for your service.