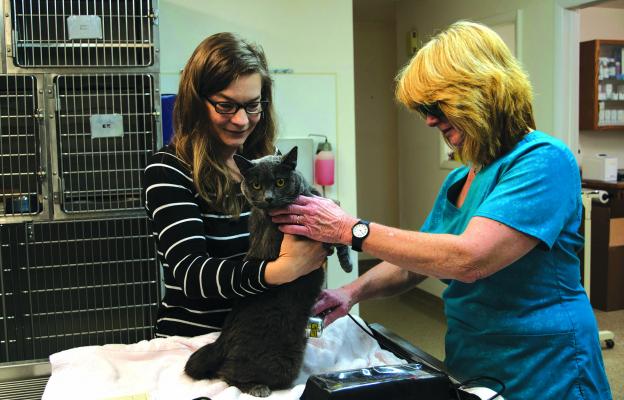 ENNIS – Wisps of animal fur floated on Dr. Stacy Davidson’s blue jeans as she hugged the grey-blue cat, Jack, on the table. The examination room in the back of the Ennis Veterinary Hospital hosted more people than usual as equipment for a new blood-work lab was being installed. A hand rubbed behind Jack’s chin another massaged his neck – he was too comfortable to care about the prick of a needle in his back.

Davidson recently moved her family to start her first veterinary practice in Ennis. She took over the 33-year practice of White & White in Ennis and West Yellowstone on March 15, 2019.

She graduated from Mississippi State University with a doctorate in veterinary medicine in 2004 and has worked as a veterinarian for about 15 years, but this is Davidson’s first time as an owner of a veterinary practice. Her husband, Bob Davidson, runs the business side of the practice while she focuses on the clients and veterinary operations.

“The clients have been fantastic and the staff is amazing,” Davidson said.

Davidson also works at the West Yellowstone Grizzly & Wolf Discovery Center where she administers shots for bears, wolves, raptors and otters. But at the Ennis and West Yellowstone practice, she only sees cats, dogs and some pocket animals.

After speaking with the previous owner, Eileen White, over the phone, Davidson quickly booked a flight from Hilton Head, South Carolina to Ennis, Montana.

“This is it,” Davidson said. “They raised five children here, the feeling was right, and I liked the type of practice they built.”

She was looking for a business opportunity as well as a place for her two girls to grow up. The Davidsons moved into the house that the Whites built next to the practice. Their girls can run over from across the yard anytime.

One of the first things the Davidsons did was go to the Dillon Animal Shelter to adopt a dog and two cats. Their pet population has since grown, to include an unlikely friendship between Buffy the white lamb and Momma Rabbit the mother of the small, dark fluff balls dashing and thumping in their covered pen. Davidson said that animals keep falling into her lap. She’s already had to find homes for three stray cats.

Davidson has been updating the Ennis clinic equipment to serve Madison County. The change in ownership wasn’t a concern to the anonymous donor, who had planned a large donation to the White’s office and made many of Davidson’s improvements possible. The Ennis Veterinary Hospital is more equipped to handle emergency situations, where previously a trip to Bozeman might have been necessary.

From a digital dental x-ray to an anesthesia monitor, Davidson is making the hospital more efficient and accommodating for more procedures. Jack the cat didn’t have to endure the stress of surgery to address his bladder disease condition. His procedure consisted of a few minutes with a cold laser therapy pressed against his belly and some fluids.

“It’s getting it [the clinic] to the norm,” Davidson said.

Linda Dombrowsky has been with the practice for 15 years as a veterinary technician. She’s needed a telescope to assist her work for a long time and was excited for the clinic to get one this year. Dombrowsky worked with the Whites and said the transition was smooth.

Respecting the schedule that the practice’s former owners made, Davidson divides her time between the West Yellowstone and Ennis clinics. Through the intense Montana weather, Michael White never missed a Monday or Wednesday morning at the West Yellowstone office. But Davidson is from Mississippi and isn’t as confident about commuting in winter conditions as the seasoned Montanan.

She’ll see clients at the West Yellowstone office twice a week with the possible exception during extreme winter weather.

“It’s been non-stop busy but we like that,” Davidson said.