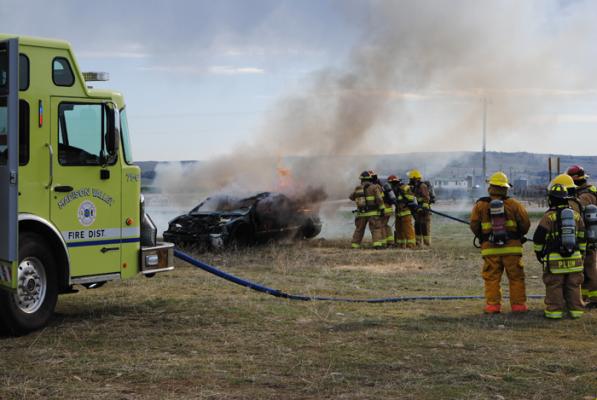 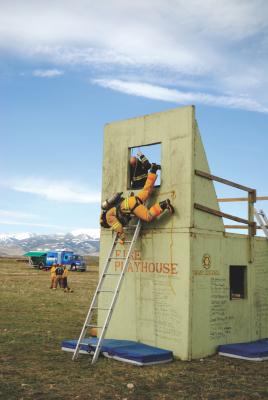 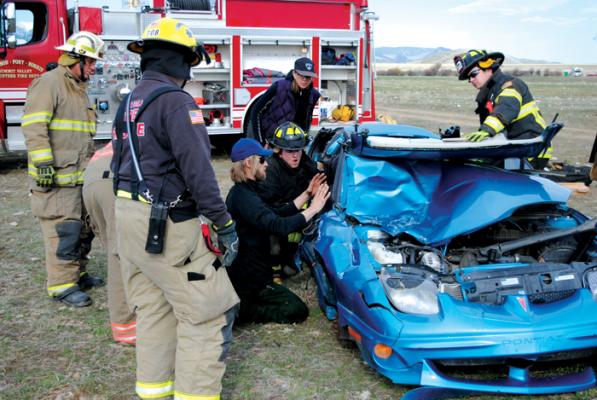 HARRISON – On Saturday morning, April 29, in a field north of Harrison, Tyler Dixon, Jeff Gerhardt and Larry Leonard carefully walked towards a burning blue four-door sedan. The car was engulfed in flame and throwing plumes of gray smoke into the warming sky.

The trio, all local firefighters and dressed in full turnout gear, approached the car hose in hand. Their mission was two-fold: put the fire out and stay safe.

Mission one, putting the fire out, was relatively easy, something they’d done before.

Mission two, learning some newer techniques for staying safe and handling the myriad of issues firefighters must deal with, was the reason the trio and more than 50 other firefighters and first responders were gathered in Glenda Ohs’ field Saturday morning.

“There are many hazards approaching a burning car,” said Dixon.

“You have to approach from the side, at a 45 degree angle, because the bumper struts, if they explode, can shoot forward and take you out at the knees,” Gerhardt explained.

Nearby, another group of firefighters was learning how to approach a burning propane tank safely. At another station in the training – the “green monster,” or fire “playhouse” -- firefighters were learning how to escape from a tight enclosure, including second story window, should the need arise.

According to Boice and Marsha Atkinson, who have organized the growing Harrison event for several years – Boice is a 13-year firefighter veteran, Chief of the Harrison Volunteer Fire Company; Marsha is also a firefighter – the idea driving the training is to prepare firefighters for “anything.”

Boice said local firefighters need this type of training because they never know what they might get into responding to a call.

For example, a home fire can become extremely dangerous for a firefighter when a propane tank is involved; or a “simple” vehicle accident can turn into a hazardous materials situation, or become explosive, depending on what’s being hauled.

Boice recounted a 2012 incident where a home blew up when four propane tanks ignited. Thankfully no firefighters were injured. Still, knowing how to handle these situations lessens that chance, and that was the purpose of the academy training, he said.

Firefighters from Ennis, Virginia City, Phillipsburg, Three Forks, Dillion, Bridger Canyon, Grasshopper, along with state and federal wildlands fire personnel and some EMS teams were participating, he said. These units were split up and recombined into new teams so to facilitate networking – something fire companies must often do when battling blazes. These teams then worked their way a series of stations.

Marsha is the force behind getting the training organized, Boice said. Marsha said she was already planning the next academy, and talked about growth over the years. She said Director of Emergency Services Dustin Tetrault also coordinates a lot of the event. Invites come word-of-mouth and via social media, she said. Future growth would incorporate more first responders, she said.