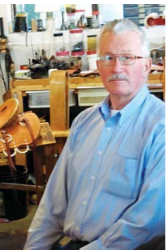 dad tossed a saddle and a bundle of strings at his feet. The old rancher offered him no tutoring, only the directive to “lace them up” right there on the driveway.

“Nervous would be an understatement,” says Ericksen, clarifying the experience. “I had some leatherwork experience and made holsters for toy guns and saddlebags from old boot tops, but nothing like this. I remember getting it done and, as far as I know, the job held. I think my stepdad wanted to keep me occupied.”

Looking back, Ericksen describes the signposts of a career that has been hard-earned and was a long time coming. Born in cowboy and beef country Sand Hills, Neb., Ericksen finished his first saddle with the help of an instructional, unassembled Tandy leather kit, readied while he was enrolled in the U.S. Navy, stationed on Key West.

“As far I know it was the only saddle on the island at the time; I don’t think there was a horse there at all, and I could have definitely used some kind of a practical help book then.”

Utilizing the GI Bill, Ericksen attended the L.H. Brand saddle making school in Ralston, Wyo., in 1971, where for three months he learned things such as constructing, patterning and repairing, before he moved to Ennis. From the moment that he finished school to the time that he settled in Madison County, Mont. – approximately 17 years later – he completed about 30 saddles. As it turned out, a much more productive future was yet to come.

Initially, Rick ran a shop in downtown Ennis, where he fixed shoes and boots, a talent he learned from a fun-loving character in rural Nebraska called Donald Joe Downing, who operated a business named the D Boot Shop.

“From the start I had plenty of work in Ennis,” said Ericksen. “Even better, I spent the tail end of my weekends in the mountains, like 700 miles of maintained trails off this valley alone.”

For the first year he mostly focused on repairing boots and shoes, though he would try to sell his first custom saddle – with no luck. While he was out exploring the backcountry, he would bring along an old McClellan army saddle and tinker with it, adding a saddle horn or putting big rings on it. He learned how to pack, acquired a couple of mules, and continued to work with his saddle and pack string.

One day, he decided to re-direct all of his creative energy away from that old army saddle and toward the construction of another brand new saddle. He ordered a Ralide company saddle tree, a polymer-plastic mold capable of being shaped and pounded out, and then he got busy with his hands and mind. He had had his idea and he had deliberately prepared himself to follow it up, and this was his life.

“Cutting holes in the cantle was about as far as I got, when a couple of people came in, strangers, from out of town, I showed them the saddle I was building and explained how it was a mountain hunting saddle. They asked the price and I made a quick calculation and I shot them a price, and they bought a pair. I sold six before the initial saddle was even made.”

More than thirty years of defiant spirit and 1,177 total saddles later, Ericksen is still in the nucleus of the profession, thanks in no small part to a monthly magazine first published in 1936, and the US Post Office.

“They sold the building I was renting in downtown Ennis and an old friend suggested I move the business to my house and put the money from rent into advertising and do mail order. I put an ad in Western Horseman magazine and orders trickled in and I’ve been three months behind for 30 years, mostly all mail order.”

Approximately 80% of Ericksen’s customers are “mule people,” he says, before explaining that his “recreational saddles are designed to hunt elk and trail ride.” “Mule backs are built differently,” said Ericksen. “Mules and horses are like people, with different backs. The hardest ones to fit are the real round ones built like a barrel. Horses have a more prominent wither, more of a donkey back. My saddles fit about 90% of mules and 80% of horses. I will shape the bar to suite myself and then if I get the height, weight, general body type, and I can go from there I can fit them pretty close…”

Ericksen constructs his saddles with Hermann Oak natural vegetable cowhide leather, derived from US domestic steers, tanned in Missouri. “The quality of the leather makes the biggest difference,” said Ericksen. “Hermann Oak leather is what I started using in saddle school and I never changed.”

Time is a contributing factor to the overarching quality of the final product; Ericksen is generous and abundant with his hours, refusing to yield, budge, skimp, or shortchange, until the final action is certified. His Sheridan-style tooling is a work of art within a work of art.

“Little things separate the handmade from the factory, where housewives in Tennessee shoot staples into their saddles on the assembly line, where parts are whacked together. Factories use the cheapest leather possible and their tooling is from a press or stamp. There is no edge work, just straight and sharp.

A seasoned adult, Ericksen, 73, is the very image of productive self-sufficiency, his life entailing a series of creative exercises. He experiments with boot repairs and other saddle related accoutrements, as well as a few other new, artistic leather-tooling projects; nonetheless, he has vigorously sworn his allegiance to a long haul of saddle manufacture. Indeed, in September 2020 he even built six similar style saddles in a single month, his perspective of premise-to-conclusion perfection never sauntering. Life changes, the will remains.

“There is no retirement for the saddle maker. It is labor intensive, but I could make one comfortably in about a week, but generally I am at one or two per month. I work six days a week doing what I like and I enjoy, and I will continue to do it until I drop dead over my hammer.”