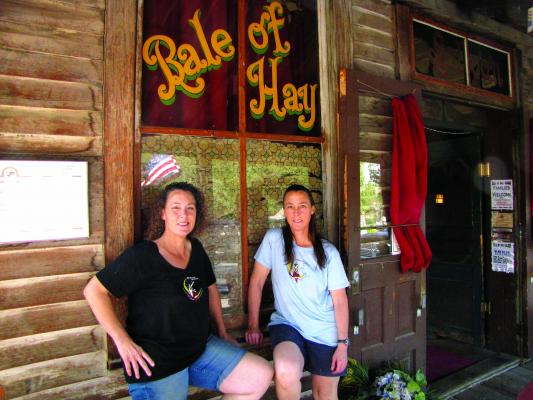 The end of an era in Virginia City

After nearly 16 years, the twins are leaving the Bale of Hay

VIRGINIA CITY – On September 22, a Virginia City institution will be no longer:  The Twins, Gay and Kay Rossow, will no longer run the Bale of Hay Saloon in Virginia City.

They’re not getting out of Dodge… er VC. They’re switching businesses; transitioning from saloon-running to hawking candies and chocolate, or “swapping one addiction for another,” as Kay said, in jest.

However, after more than 16 years at the Bale of Hay, things just won’t seem the same there, people have told the twins following their Sept. 4 announcement of this transition.

“Maybe it will be better,” said Gay, on Saturday morning, Sept. 8, when the twins actually sat down for a few minutes and shared their stories and the future plans from a table inside The Bale of Hay.

Gay Rossow was the first of the twins to come to the Bale of Hay – originally the J. F. Stoer Saloon. She landed there in 1991, she said, when she began working for Bovey Restorations, as an assistant general manager.

For the next five years, Gay made sure all of the 18 restaurants, bars and other hospitality venues under the Bovey prevue were being run appropriately, she said.

Beginning in the 1940s and 1950s, the Boveys – rancher and state legislator Charles and his wife Sue – began buying up much of Virginia City and Nevada City, restoring these towns’ old historic structures, and operating them as a tourism destination. By 1961, their efforts earned Virginia City a designation as a National Historic Landmark.

Charles Bovey died in 1978, Sue passed in 1988, but their family carried on their efforts after this.

In 1994, the Virginia City Preservation Alliance was formed by local citizens and others interested in preserving the history of the town.

Three years later, in 1997, the Montana Heritage Commission (MHC) stepped in to purchased the town from Ford Bovey and take ownership of the Bovey holdings, to preserve and protect state history, and create a tourism venue.

Meanwhile, Gay continued to work at the Bale of Hay and, as a registered massage therapist – she graduated from the New Mexico Academy of Healing Arts in June 1999 – operated Body and Soul Massage Therapy

Kay came up to Virginia City from Texas in 2002, and began pouring beers at the saloon.

In 2003, the twins, now together, made their pitch to MHC to acquire the Bale of Hay. Initially, they didn’t give much thought to running the Bale of Hay, but when the lease came up, and their customers kept telling them they would be a good fit for running the place, they put in a bid.

It was accepted, and from that point on, the Bale of Hay grew to become the institution it is today.

Kay, earlier this year, called what she and Gay have done at the Bale of Hay “caretaking history.”

“We made a series of good business decisions,” she said, crediting these decisions with making the saloon what it is today.

Some of these decisions included expanding the menu – it used to be there was only a Tombstone pizza oven in the saloon. Kay said she realized that to keep people here, they needed to serve food, so they expanded their food offerings.

They also made a special effort to include local products from local distilleries and brewing companies. This and buying American were important business decisions for them, Gay said. “Some people don’t care about that, but we did.”

They also bought the Ghost Tour, and expanded it, in 2011. And they held three annual festivals.

Saturday afternoon, Kay recalled how a customer once told her that she could sit on the boardwalk porch of the Bale of Hay and see everyone in the world go by. “I think I have seen a fair part of the world go by in the last 16 years,” she said.

Kay said she would not miss all the hard work and long hours she and Gay put in the saloon. Their days are “insane,” often 12 and 13 hours long, plus running Body and Soul Massage.

What Kay and Gay said they would miss was the people, the social aspects of the saloon, and the relationships formed with people over the nearly 16 years they’d run the saloon.

Kay specifically cited the local businesses they did business with, the distilleries and breweries. She talked about seeing customers five or six times a summer and building a relationship with them.

Both twins talked about how they’d had customers who came into the saloon, ordered something special each time, and how they’d remember them from this order, how when that order came up, they’d look for that specific customer.

Kay also mentioned the bands, how various band members wondered if they’d have an opportunity to play at the Bale of Hay again. She encouraged them to stop in and have a free-for-all jam session before the saloon changed hands.

Gay recalled how singer Steven Tyler, of Aerosmith fame, and Paul Teutul Sr. (“Big Daddy”) of Orange County Choppers reality TV show, came into the Bale of Hay one evening. Tyler dumped his motorcycle out in the street she said, and she didn’t recognize either one of them, until one of her customers whispered in her ear that the celebrities were in the saloon.

She ended up giving Tyler a Bale of Hay T-shirt and told him to wear it some place cool. He did.

Both Twins were excited about their future plans, too.

It is an entirely private business, not connected to MHC, the twins said.

“It’s exciting,” said Gay, “the business model is a textbook model. We might pretty up the edges some, and add a line of chocolates maybe some hand-made gift baskets to the mix.”

They said they have not found anyone to take over the lease at the Bale of Hay yet, but felt confident this would happen soon.