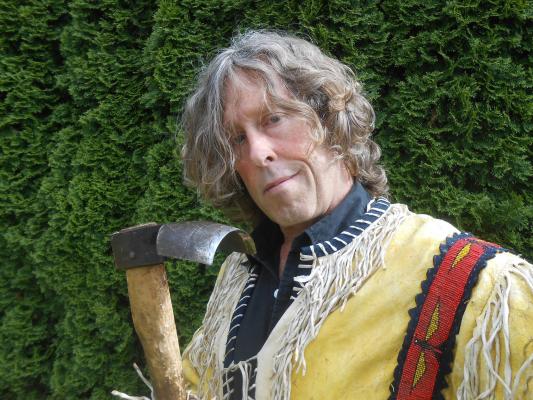 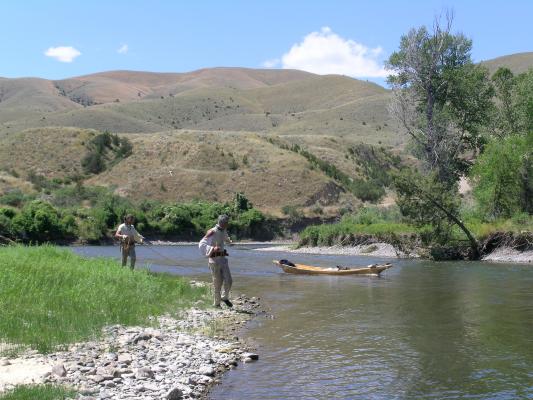 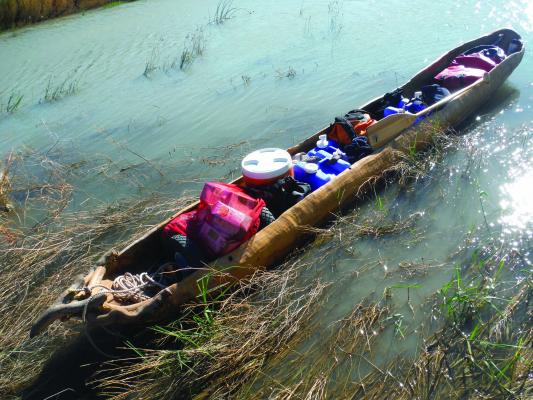 In 1805 the Lewis and Clark Expedition paddled, poled, and cordelled eight dugout canoes up the Jefferson River. Today, Churchill Clark, the great-great-great-great grandson of Captain William Clark has returned to the Jefferson to carve a new dugout canoe with Tom Elpel at River Camp, near Cardwell. The public is invited to stop by to see the project or to swing the adze and chip away at the canoe.

As a child, Clark heard about his connection to the famous explorer, but didn’t know the history. He joined Lewis and Clark re-enactors during the Lewis and Clark bicentennial from 2004 to 2006, following the expedition route from St. Louis to the Pacific Ocean and back. Clark was one of few people to physically replicate much of the journey, including cordelling a dugout canoe up the Jefferson River with one other guy and a Newfoundland, the same breed as Lewis’ dog Seaman.

Cordelling is the process of dragging a boat upriver with long ropes. “Cordelling the Jefferson was frustrating,” Clark said, “There was too much brush along the bank, forcing us to walk in the river, slipping and twisting our ankles all day on the rocks. It was a relief to discover in the journals that Lewis and Clark wrote exactly the same thing.”

Two-and-a-half years on the Lewis and Clark trail ignited Clark’s passion for dugout canoes. He helped carve one canoe on the trail, and has since carved several more, including a ponderosa pine canoe now on display at the Yellowstone Gateway Museum in Livingston. Clark paddled the Missouri again in 2014 and 2015 in a cottonwood canoe he made.

“I’ve dreamed of carving a dugout canoe for many years,” Elpel said, “and now that dream is coming true.” Elpel is planning a six-month trip to paddle the canoe down the Missouri to St. Louis next year.

Elpel intended to work with a cottonwood tree, however, the designated tree wasn’t big enough, so he bought a 10,000-pound, twenty-foot-long Douglas fir at the lumber mill and had it delivered River Camp by Mayflower Bridge. Elpel teaches wilderness survival skills to local school kids there through his program Outdoor Wilderness Living School, LLC (OWLS) and to adults through Green University, LLC. “We’d love to have busloads of school kids come by to participate in the project,” Elpel said.

Clark enjoys the slow, authentic pace of carving a dugout canoe with hand tools. However, the Douglas fir is hard enough and so full of big knots that a chainsaw is necessary to block out the inside and roughly shape the canoe. Clark and Elpel expect to work on the canoe throughout April and part of May. “The public is invited to stop by 10 a.m. to 5 p.m. whenever the gate is open,” Elpel said. “Above all, it is an educational project, and we’d love to share it with the community.”