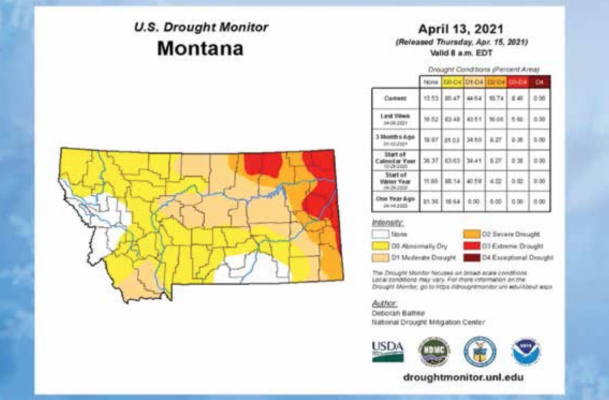 Below average precipitation, above average temperatures

A snowmelt-dominated system is one whose water supply depends on melted snow. The Ruby Watershed is one of those systems.

The snow water equivalent (SWE) is the amount of water contained in the snowpack. The Ruby Valley Conservation District (RVCD) has a fun athome science experiment on their website one can perform to determine SWE. Essentially, fill a mason jar with snow, mark the height of the snow on the jar, let the snow melt, and reevaluate the remaining water level.

The Natural Resources Conservation Service (NRCS) uses something called a SNOTEL monitoring system to track snowpack and determine how much water is stored in the snowpack and will be available for future use. There are four SNOTEL sites in the Ruby Watershed. Before automation, snowpack was determined manually, through something else called a snow course. Data from snow courses in the Ruby Valley dates to the mid to late sixties. SNOTEL sites now are where all snow courses were at one point and started collecting in the late seventies and early eighties.

Lucas Zukiewicz, water supply specialist for the NRCS, started his presentation during RVCD’s virtual Earth Week and quarterly meeting with a joke—in virtual formats, it is, of course, easier to drink a beer discreetly while listening to a presentation. Zukiewicz said if that is your case, you might want to grab a second for later.

The Ruby Watershed, Zukiewicz began, is one of the highest ‘consumptive areas’ in terms of irrigation across the state. Agricultural diversion of water accounts for 67% of consumptive water use in the Ruby Watershed, he explained. If the Ruby Reservoir did not exist, water would run out of the watershed and not be as useful in irrigation systems for agricultural purposes.

The Ruby Reservoir supplements snowmelt runoff for agricultural uses in the Ruby Valley through the summer when the demand for water is higher. More generally across the state, irrigation is the primary method of water usage.

“It really just puts that much more importance on both storage of the Ruby Reservoir and snowpack above it just because of how many folks are relying on that water and that delivery of water, not just over a month or two, when all the water would pass through if we just had natural snow melt, but that supplemental water we have coming out of the Ruby,” Zukiewicz said.

Zukiewicz went on to explain that the reason the Snow Survey and Water Supply Forecasting program began in the early 1920s on the east side of Glacier National Park was to figure out how much water was available for crops. He described it as a direct ‘evolution of industry and lifestyle in Montana, rural and driven around water use for irrigation.’

And then Zukiewicz got into the meat of the presentation, which was also when an attendee got another beer.

March through June are typically the wetter months in the Jefferson drainage. Snowpack supplements these precipitation amounts when they are on the lower end of the spectrum.

Looking at current conditions in the Jefferson drainage, only October and February had regular precipitation levels.

“We have not seen our normal precipitation through this winter and that equates directly to the snowpack numbers…so we’re coming up on those make-orbreak months,” Zukiewicz said.

Beyond the SNOTEL numbers—reporting average snowpack data—an evaporation index Zukiewicz provided showed that the warmer temperatures are a factor in drying out the area.

“The way the patterns are setting up this year, it’s setting up to be very dry,” he said.

The Office of the Governor released the annual Spring Water Supply and Drought Outlook on April 26. It made note of how different spring conditions in Montana look now compared to a year ago.

“The current, abnormally dry and drought conditions across Montana are the result of the combination of overly dry conditions prevalent last fall in addition to the warmer and drier than average conditions that characterized the winter,” the report stated. It outlined the next eight to ten weeks as a critical period where conditions could improve before the summer.

“In terms of our overall snowpack, this is one of the lower years in the last six years and if we were to rank this year against the last six years, it would be the second lowest that we’ve had since 2015,” Zukiewicz said.

In the Biden Administration’s American Jobs Plan, funding for western states impacted by the drought crisis is outlined as a step to ‘maximize the resilience of land and water resources to protect communities and the environments.’ The American Jobs Plan would invest in recycling and water efficiency programs, Tribal Water Settlements and dam safety.

“When you start coupling together the pieces of the puzzle that we’ve talked about so far here—long-term deficits in precipitation, below-normal snowpack—coupled with some of these outlooks we’re seeing here, there’s a likelihood that we could see below average to well-below-average flows on the Ruby this year,” Zukiewicz said.

A participant asked if there was a way to factor potential extra rain into the predictions. Maybe snowpack might be less of a resource in the future, but we could expect more rainfall than snow.

“One of the things that might be ironic about a warming climate is that those patterns are more common when we have those threshold temperatures, so that warm air pushing up from California and those storms, it might be way less snow cover, but more precipitation during different periods,” was Zukiewicz’s response. “So, if we could change those synoptic patterns it might change to rain dominated. We could see a lot more southwest flow, which might be great for a precipitation component, but if it’s not as much snow, I mean I don’t know how you weigh those two. It’s really tough.”

He said he does not want to call people out or raise red flags. But he also is not afraid to tell those that ask like it is.

“There’s certainly reason to be especially conscious this year…I’d rather people plan for the worst and get better than they expected,” he said.

Don’t shoot the messenger, Zukiewicz said as the end of the presentation drew near, and he discussed the long-range weather forecast.

As it appears, we are to anticipate ‘above normal changes of above normal temperatures’ through the summer. According to the Spring Water Supply and Drought Outlook report, the current temperature outlook for April calls for a 33% chance of above average temperatures across most of the state. Warmer and drier temperatures make spring and summer conditions difficult to interpret.