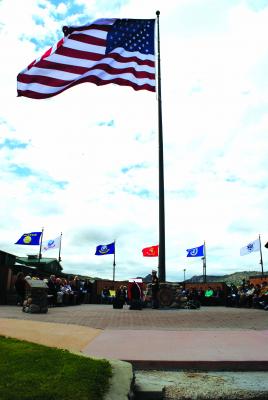 ENNIS - The memorial service for a veteran who wished to build a memorial to honor all veterans took place Saturday afternoon, May 19, at the Ennis Veterans Memorial in front of the community school.

There, people from all over the U.S. came to honor and remember Lieutenant Colonel Andrew “Andy” DeBona.

DeBona passed away in early February, in California, at the age of 81.

He was a highly decorated soldier who enlisted in the Marine Corps as a recruit in 1955, following high school, and served through 1980, rising to the rank of Lt. Colonel. During his service, DeBona was awarded the Navy Cross, three Bronze Stars, two Purple Hearts, a combat action ribbon, a Presidential Unit Citation, the Vietnamese Gallantry Cross and Silver Star and other medals.

His service took him through both peacetime and war, including the Vietnam conflict. It was in Vietnam, where the true mettle of DeBona’s character surfaced as both a leader and a soldier, according to those honoring him at the service.

For example, Col. William Wischmeyer, USMC (ret.), a South Dakotan, called DeBona, “a real Marine,” and the “role model for a warrior,” saying that some men are made for war, and DeBona was one of them.

Several people who spoke about DeBona during the service recalled his courage and his leadership under fire during this particular fight.

Assistant Commandant of the US Marine Corps, General Walter Boomer, USMC (ret.), said DeBona was the “bravest man he ever knew.” He told how DeBona’s rifle company relieved a platoon, surrounded and pinned down in a bomb crater by NVA, then covered their withdrawal under three waves of assault by the NVA.

Years afterward, Boomer and DeBona reunited and were sharing war memories. DeBona hugged Boomer and told him he loved him. Boomer said DeBona was the only man, aside from his father, who’d ever said that to him. Those at the memorial service were clearly moved by the memory.

Bill Meade, from York, Pa., was DeBona’s radio man during a number of conflicts. Radio men, said Master of Ceremonies Col. William Warren, were the alter egos of their commanders in Vietnam. They were practically tied together in the field, always within arm’s length, relaying orders to and from command.

Meade shared how he – a raw, 19-year-old recruit when he met DeBona – had no idea what to expect from a commander. Meade said DeBona turned out to be a role model and a powerful influence on his life.

Meade, who is spending the summer in Cameron, recalled a funny moment he shared with DeBona: While the rifle company was sweeping a village, Meade said orders to be on the lookout for a Vietnamese man on a white motor scooter, wanted for questioning, came down from command. DeBona replied, “If we come across this white knight on a scooter we’ll go in, guns blazing, and deliver this scooter.” Command’s response was, “Roger.”

Major Larry Deibert, US Army Reserve (ret.) recalled being in the air over DeBona’s rifle company during the Easter 1972 fighting. He recalled DeBona’s bravery under fire, and how for two hours he flew over the conflict, calling in artillery and air support for DeBona’s ground troops. The noise of battle was intense, he recalled, radio operators shouting their commanders’ orders to the air and artillery support behind the roar of explosives and crackle of small arms fire.

Col. Wischmeyer also recalled DeBona’s peacetime courage. He told how, shortly after having 13 lymph nodes removed as part of a cancer treatment, DeBona made a trip to San Diego, Calif., to participate in a Marine gathering because it was important to others. He could barely sit up, Wischmeyer said, but DeBona survived the treatment and went on to hold “DeBona defies death” parties for the next 37 years. He also talked about how DeBona conquered the high-priced San Diego real estate market as a salesman, and within just five years, made enough to retire.

The memorial service concluded with an honor guard, taps, the presentation of the memorial colors to Debona’s widow, Christine, and a reception at the El Western Conference Center.