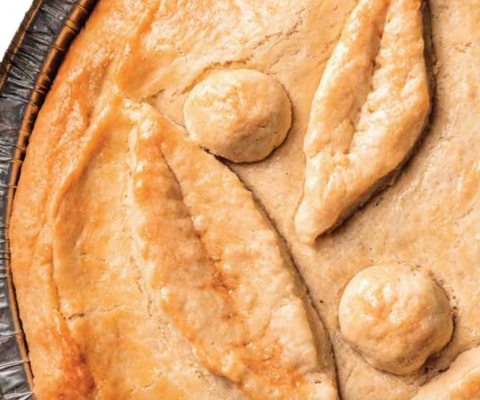 A cultural history of pie

As ever, the battle between sweet and savory pies rages on

If you strip pie down to its bare basics — the Platonic Pie, if you will — the concept is extraordinarily simple. It’s a crust of some sort filled with literally whatever you want. It should come as no surprise, then, that the history of pie stretches back thousands of years. This pastry’s flexibility has allowed it to adapt to different times, different cultures and, above all, different tastes.

Modern pie means different things to different people. It’s a symbol of Americana, it’s a staple of the holidays, it’s a savory pub meal and it’s a thing to throw in a clown’s face. Exploring the pastry’s past bounces you around the world and shows the enduring power of dough-wrapped food.

Deciding where the history of pie starts will test your understanding of what a “pie” is. Many historians trace it all the way back to the ancient Egyptians, who had a kind of pastry made from grains like wheat or oats, but this is more like a galette — a pan-less, looser-form pastry — which arguably isn’t very pie-like. These early “pies,” especially those eaten by Egyptian sailors for nourishment on their journeys, are more like an early version of biscuits or hardtack.

The award for earliest pie, then, might just go to the Sumerians, because a tablet with the recipe for a chicken pie was discovered on a tablet dating back to around 2000 BCE. Nothing else is really known about this pie, though, and it still didn’t resemble the modern pastry we know.

Then there’s the Greeks, who some historians also credit with “inventing” pie. The Greeks took Egyptian recipes and enhanced them with pastry, making the whole thing less bread-like and more pielike. There’s not a huge amount of writing about Greek pies, but in the fifth century BCE plays of Aristophanes, there are allusions to pastries filled with fruit.

The Romans have a greater written record, so more is known of their baking exploits. Their writings also reveal the early division between sweet and savory pies, which is a split that has carried through to modern pastry-making.

On the savory end, the first meat-based pies were not intended to be eaten as pies at all. Romans would use dough as a way to encase meat and to keep it from drying. It wouldn’t be until pies traveled outside the Roman Empire that meat pies took over the world of stuffed pastry.

The Romans did eat sweet pies whole, and these were probably more similar to modern pies than anything mentioned so far. The earliest Roman recipe for this foodstuff, published in roughly 160 BCE, involved a rye crust, goat cheese and honey. It’s not a pie you’re likely to encounter in a modern bakery, but all the components were there for the subsequent rise of this food.

The spread of pies

Because of their subsequent conquest of most of the European continent, Romans have had an outsized impact on the West. Much like the Latin language spread across the landmass, so too did the pies. Because of the pie’s mutable form, any country could make a pie by putting its local foods — meat, nuts, fruit of whatever variety — into a crust.

The biggest change that occurred at this point in the history of pie had to do with the crust. One of the distinguishing features of pie crust is that, unlike bread, it needs to be made with some kind of fat. In Rome and other parts of southern Europe, the fat of choice was olive oil, which limits how easily the crust can be shaped. In northern Europe, the cold climates kept olives from being grown, and so other fats were used, like lard or butter. This brought us one step closer to the modern pie, which also usually use one of those ingredients to form the crust.

The best pies in London

While pies did spread all across Europe, England likely had the biggest influence on the history of pie. It’s also where the pastry finally got the name “pie” (or “pye”) sometime before the 14th century, though no one is quite sure where the word came from. The best guess is that it’s connected to the magpie, which is a bird known for collecting objects to line its nest. The idea was that just as the bird collects things, a baker collects things to put into a pie.

English and pies are especially intertwined because not every language has a separate word for “pie.” Most languages tend to call pies words that look more like “tart” (like the Dutch taart and the Portuguese torta) or “pastry” (like the Spanish pastel or the German Pastete). That doesn’t mean there aren’t pies in other places but does imply that it was a more defined category in England than in other places.

By the 12th century CE, pies were a commonplace dish in England, but they were still often seen as a way to keep meat fresh for longer periods of time. And it stayed that way for a while. By the middle of the 16th century, a pie crust would be called a coffyn, which — despite sounding funerary — means “basket.” And these baskets could be so thick that the pies were more crust than filling.

While the written record supports the idea that pie crusts were not meant to be eaten at this point in history, Janet Clarkson — author of Pie: A Global History — argues that it may have been a matter of class. While the English nobility may have been okay with throwing the dough that encased their preserved meats into the garbage, the lower classes wouldn’t have tossed out something edible so flippantly. Medieval serfs weren’t exactly rolling in food, after all. The consumption of the crusts may have gone from the lower classes on up, then. And by the time it reached the upper classes, chefs had figured out how to create delectable pies from the inside out.

By the 16th century, pies made a slight turn from the savory to the sweet. Though custard pies had existed for a while, fruit pies took a while to catch on. The first cherry pie ever made was notably served to Queen Elizabeth I, though no one knows how she reacted to it. In any case, it was a golden age for pie experimentation.

And the chefs didn’t let their ingeniousness end with just flavor; many went for presentation. You may have heard a popular old nursery rhyme called “Sing a Song of Sixpence,” which includes the lines “Four and twenty blackbirds, / Baked in a pie.” While this might sound like a pie filled with bird meat, it is in fact a reference to a practice of putting live birds into a pie that would fly up and out when the pastry was uncovered (in this case, the pie would be massive). And it didn’t stop at birds: chefs would use anything and anyone to provide entertainment to the upper classes. In the 17th century, a young boy with dwarfism (who would grow up to be a popular entertainer) was placed in a pie to surprise English King Charles I and his wife. And who wouldn’t be surprised by a small human bursting out of their food?

As American as apple pie

When the English created their new colonies in the Americas, they brought pie with them. These early pastries would have been very similar to the pies back in England, but it didn’t take long for them to start creating new recipes from the locally available crops.

At several points in the history of pie, chefs would make a sweet version of the pastry. But it was in the United States that the food made a final evolution from main course to dessert, and it was all thanks to one obvious ingredient: processed sugar. While we might take sugar for granted now, it wasn’t widely accessible in the United States until the early 19th century. This was when the sugar industry exploded in the southern part of the country, along with the heinous slave trade that made it possible. As soon as regular people could afford to buy sugar for their families, they were adding it to all sorts of desserts to augment the sweetness.

The most American of pies is inarguably the apple pie. But historically, that’s not really true. For one thing, apples are not native to the Americas. They’re from Asia and were brought over to the “New World” by European immigrants hundreds of years ago. Americans did eat apple since pretty much the founding of the country, though. First, colonists would cook them using dried apples carried across the Pacific Ocean, and later eating the many varieties of apples spread across the country (think Johnny Appleseed).

In the early 20th century, though, apple pies started slowly becoming equated with Americanness. Soldiers in World War II would say they were fighting for “mom and apple pie,” conjuring images of an idyllic countryside. The image stuck, and apple pie still calls to mind a specific image of the 1950s nuclear family.

Reducing the United States to a single pie is too simplistic. There are recipes from across the country that reflect the diversity of the people. There’s pumpkin pie, made possible by the pumpkins that were native to North America. There’s shoofly pie, a molasses-based dessert created by the Pennsylvania Dutch in the late 19th century. There’s pecan pie, made from a nut native to the southern United States, which has become a holiday staple across the country. A pie crust can hold whatever you want it to, making it the perfect vessel for reflecting a culture’s tastes.

*This story was originally published by Randi Tanglen and Humanities Montana. Subscribe to their weekly DIY Humanities email for more original and exclusive content at www.humanitiesmontana.org