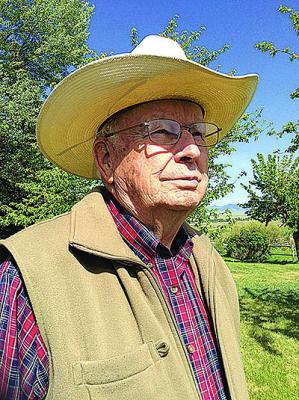 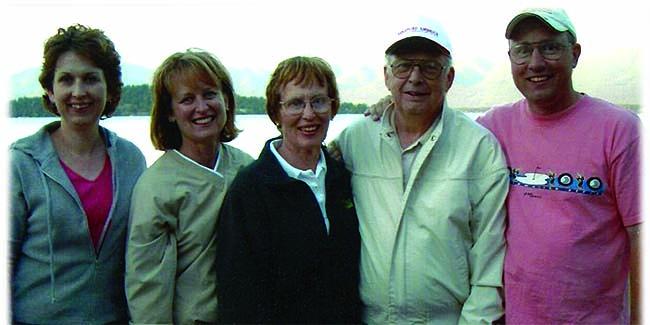 TWIN BRIDGES – Byron Bayers, 88, sat in the easy chair in his living room on the ranch his parents began, a little flustered by all the preparations that were needed to pull off the 100th anniversary of Bayers Hereford Ranch.

The ranch is hosting a centennial celebration to honor its 1918 founding by Art C. and Elizabeth Bayers, Byron’s parents. The Bayers Hereford Ranch has the oldest continuous Hereford herd in the state. And the celebration will take place on Saturday, July 7, from 10:30 a.m. – 3 p.m., at the Round Barn, located at 175 Bayers Lane, about 1.5 miles north of Twin Bridges. A complimentary replica sale will take place then and lunch will be served at 12 noon.

Emotions washed over Byron’s face as the memories flooded back in answers to questions posed about the upcoming event.

He smiled, recalling how, as a boy, he played in the Round Barn on the ranch – perhaps its most prominent landmark today.

The barn was built in 1882 by Noah Armstrong, for the Doncaster Stable and Stud Farm. At that time it had three floors, an automatic windmill driven watering system for the horses, feeding chutes, an indoor track, and stalls for 24 thoroughbreds. One of Armstrong’s horses, Spokane, won the 1889 Kentucky Derby; another, Lord Raglan, came in third in the 1883 Kentucky Derby.

All of that was neat history, Byron said, but the horse end of the barn only lasted 10 years, and those were not his recollections of the barn.

His father bought the Doncaster Ranch with its Round Barn in 1933, fixed it up because it had fallen into disrepair, and later converted it into a cattle barn, for show cattle and a place where the Bayers Ranch could host Hereford cattle sales.

Art Bayers brought purebred Hereford cattle and bulls to the Jefferson Valley, and Byron said that up until about 30 years ago, most of the valley, much of western Montana was not black Angus cattle country, as it is today, but Hereford country.

He said his father was originally an Iowa farm boy. But he went to college, got a six-month degree in business and started working in a bank as a cashier. (Part of his employment hinged on playing ball for the bank team, however.)

Art got into cattle later, after buying some polled (hornless) Herefords from Henry Kuhlman in Nebraska. He began raising registered cattle in Lavina, Montana, north of Billings.

Art was also a homestead agent and when Elizabeth and her sister traveled from Illinois to Montana in the Jefferson River valley, he handled their transactions, later marrying her. Together, Art and Elizabeth had five children, Byron, the youngest, and Helen, Beatrice, Jeanne, Bertha and Wanda.

Byron was the only one of the five children who was interested in sustaining the ranch, his sisters – all gone now, he said, a wave of sadness sweeping his face – married professional men, bankers and doctors.

As the only son, he bought the rest of his family’s interest in the ranch off across a span of years from the 1940s on.

Byron’s memories of the Round Barn are of cattle sales where hundreds of people would come from all over the West to seek out his family’s purebred Herefords, and his wife, Pauline, with help from other women, would host these huge feeds to fill the bellies of 500 to 1,000 prospective buyers.

It was what ranch wives did in those days, he said.

He looked away, at Pauline’s picture on the wall, remembering his wife, gone three years now, how they’d been married on July 4, 1953, then her long struggle with Alzheimer’s. Another wave of sadness washed over his face.

When asked about his early years on the ranch, he talked about helping his father run the ranch, and how, as a young man, he went to the University of Montana, like his father, recruited more for his athletic abilities in football, track and sprinting – he was a champion in high school – and earned a business administration degree.

This education would serve him well as he assumed control of the ranch, later.

Byron wanted to join the Air Force to serve his country, principally so he could learn how to fly, he said. However, his eyesight wasn’t sufficient to fly Air Force jets or planes, so, because he’d been involved in the Reserve Officer Training Corps (ROTC) in college, he was sent to lead a group of Air Force soldiers manning a radar station in Yaak, Mont.

The radar station was part of the Cold War’s Distant Early Warning (DEW) Line, a series of radar stations strung lattitudinally across Canada and Alaska’s far northern Arctic, with subsequent lines of radar station further south along the Canadian and U.S. border. The idea was to give an early warning against incoming Soviet bombers. DEW line stations could scramble fighter jets to stop the bombers from reaching the U.S.

The Yaak radar station was located on a mountaintop between the Montana, Idaho and Canadian borders, and Byron recalled 10-foot snow depths, and fellow soldiers going batty in the remote, snowy country. He didn’t mind, coming from a ranch background.

Byron said he stayed in the Air Force reserves for 16 years.

He eventually got to fly… but on his own, not through the Air Force.

He ended up charting 3 million flying miles and 10,000 hours of flying time across the 55 years he flew. He also sold airplanes for a time – until he had to choose between the ranch and selling airplanes.

The ranch, the Herefords, won out.

He was inducted into the American Hereford Association’s Hereford Hall of Fame in October of 2017.

Auctions at the Round Barn sold Bayers cattle into 38 states, and several foreign countries – Uruguay, Hungary, Mexico, Canada, even Africa during the last half-century.

Up through the 1970s, the Hereford business was booming. Byron sold a $50,000 bull in 1972, the highest priced bull to sell at auction at that time. Several Bayers Hereford Ranch bulls became foundation sires for other Hereford herds.

At one time, the Bayers Ranches included three Montana locations and 800 registered cattle.

Show Herefords also became important during the 1960s and 70s, with Byron serving as a judge at most major Hereford shows in the U.S. He said he even judged some of John Wayne’s Herefords, that Wayne had a big ranch near Flagstaff, Arizona where he raised Herefords.

Cattle were also a family affair. Pauline was named Montana Hereford Woman of the Year in 1992, and she served as director of the church choir, and played viola with  the Butte Symphony for more than 15 years.

“Ranching is a tough deal, tough for kids to get into ranching or farming into these days, unless they have the family connection,” Byron said.

Bayers dispersed much of his Hereford herd in 1990 after a lease and some key employees were lost, but he couldn’t quit the cattle business, and eventually built a herd of about 100 polled and horned cows. Ehlke Herefords of Townsend, Mont., bought this second herd in 2015.

The ranch will continue to operate a commercial purebred Hereford herd with the same basic philosophies that were maintained in the registered operation and one portion of the ranch remains in family hands, he said, but no one is interested in raising cattle these days, he said, because they can’t financially do this any more.

This isn’t going to thwart the centennial party, though.

Byron smiled when he talked about all the good food visitors to the ranch could expect. Cookies, cakes, donuts and the same stew recipe that the family used for Hereford sales in the past, he said were coming.