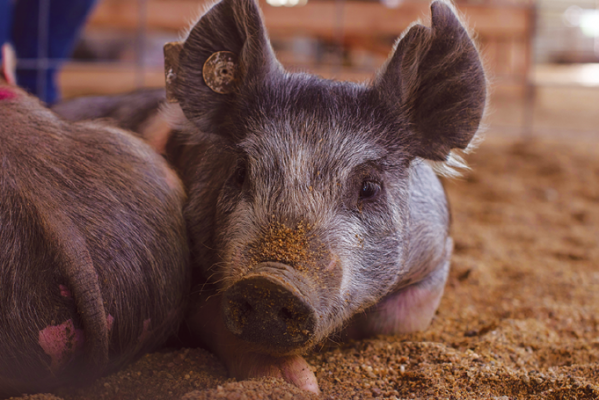 About 450 Montana FFA and 4-H students competed in the 48th annual Ruby Valley Invitational at the Morse Land Co. Arena in Sheridan Sept. 24.

Students choose to compete in one of three categories: forestry, livestock or range. Applying their FFA and 4-H knowledge in the field, they were relieved from their formal classrooms for a day. The day had a bite of fall in the air but the sun was hot for the students’ out-of-classroom education.

“The kids get excited,” Rodney Braaten said. “They compete against each other but also as a team.”

Braaten, the Ruby Valley FFA advisor at Sheridan School, has organized the annual event for 13 years, and a fleet of volunteers and teachers help make the event a constant success. Each year, participation at the Ruby Valley Invitational grows, but this year was the biggest yet.

Stalls and pens wrapped around the inside of the Morse Land Co. Arena, each holding four marked animals. Students ranging from elementary students to high school students, ranked the animals based on its category for the livestock portion of the invitational. Sheridan School Superintendent Mike Wetherbee announced each pen’s animals.

Students crowded around the pens, holding clipboards and ranking the animals from highest quality to lowest quality based on identifiers they have learned in FFA classes or 4-H. Feeder pigs, market hogs, market lambs, ewe lambs, angus bulls, replacement heifers, marker steers and market goats were ranked and students submitted their scores for the judges to review.

The junior livestock competition winner was Lilly Grismer from Cascade. Kyle Pancostt from Twin Bridges took third place with the narrow margin of eight points separating him and Grismer.

Pancostt’s scores were essential for Twin Bridges to take home third place as a team in the junior livestock competition. Cascade collectively scored the highest, earning them the first place team.

Kadyn Braaten from Broadwater won the senior livestock competition and contributed to Broadwater placing first as a team.

The range competition of the Ruby Valley Invitational took place in the open field next to the red arena. Dan Durham, a natural resource specialist in Sheridan, arranged the stations that the students would be judged on. About 60 FFA students competed.

They had to identify 25 native plant species, and ecological sites based on the soil pit. They calculated the similarity index, which measures the land condition and compares it to its natural state. From this, they can determine how well the land has been managed and how to manage it further using their knowledge from FFA classes.

The 67 FFA students who competed in forestry, were bussed to Mill Creek Campground to conduct their field work. At the first campground site, the students rotated through four stations. Ashley Durham organized the field tests for her third year at the Ruby Valley Invitational.

“It’s fun to see the next generation come up and be interested in forestry,” Ashley Durham said.

The forestry portion of the invitational was added about eight years ago. FFA classes tend to be more geared to agriculture, which can be useful knowledge in the forestry field but overall, very different.

The forestry field competition exposed most students to forestry for the first time, and they were excited to learn more about it. The four stations involved tree identification, identifying forestry and fire tools, understanding map features, estimating trees per acre and the condition with their knowledge of timber stand improvement and timber cruising.

Aidan Thompson from Deer Lodge won first place in the forestry competition, helping his team make it to second place. Missoula was the winning team with Logan Turner being their highest scorer.

The Ruby Valley Invitational is the longest and largest FFA event to be hosted by a single FFA chapter. The southwest Montana FFA event attracts schools from all around the state. This year, students traveled from as far as Toole County.