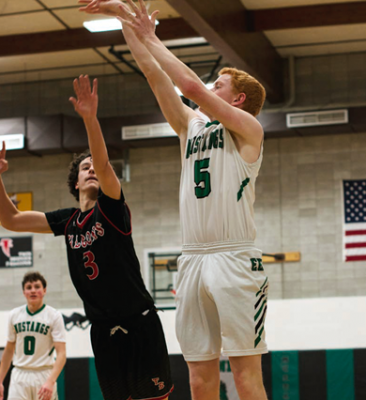 Twin Bridges followed up their loss against Ennis with two conference wins.The Falcons and Mustangs had a close game until the end. The slap of a blocked shot rang in the half. Twin Bridges’ Hadley Johnson smacked a last-second shot from Shae Lovett of the Mustangs. Ashleigh Guinnane and Allie Dale lead the Falcons in points against the Mustangs. Guinnane landed a three-pointer in the third quarter. Twin Bridges tied the game 21-21 with a little more than five minutes left. But the Mustangs re-turned, driving down the court for a two-pointer and the victory.The Falcons beat the Lone Peak Bighorns and Lima Bears in away games Jan. 24 and Jan. 25. Twin Bridges racked up 46 points against the Big Horns. Avery George fouled out in the fourth quarter in Lone Peak, and Guinnane fouled out in the third quarter in Lima. Guinnane lead in points against Lone Peak, and Dale lead in the Lima game. As one of the Falcon’s top scorers fouled out, Lexie Stockett’s game picked up for the final quarter against Lima. She scored all seven of her points in the fourth quarter. The Falcons won 40 -34. The Falcons will host the game against the Drummond Trojans Jan. 31.

The winning streak continues for the Falcons. Twin Bridges defeated the Mustangs in Ennis Jan. 23. Falcons’ Charlie Kruer was the first to put up points. The back and forth of the first half ended with Twin Bridges in the lead. Kruer #3 received his third foul with 3:33 minutes in the second quarter. He was played sparingly until the fourth quarter and still led the Falcons in points. Junior Matt Kaiser put up a three-pointer to end the first half. The Falcons came out slow for the second half, making no points in the first two minutes. But they made up for the slow start with a power finish. Kruer and Twin Bridges’ freshman Connor Nye each drained a three-pointer in the final seconds of the third quarter. Nye fouled out with a little over three minutes left in the game. Axton Anderson scored the last points for Twin Bridges, and Bo Kelley scored the last points for the Mustangs and the game. The Falcons got stronger at the free throw line as the week pro-gressed. Kruer, Connor Nye, Bryce Nye and Kaiser were major contrib-utors in all three games. Kruer lead in points against Lone Peak and had eight defensive rebounds. Kaiser lead in points against Lima. Kaiser, along with Nate Konen and Trystan Harmon, had seven defensive rebounds against Lima. The Falcons are playing strong defensively and offensively and are on their way to being the competition in the state tournament. They will be playing Drummond in Twin Bridges Jan. 31.

Harrison beat two teams on the court. First, the Wildcats defeated the Sheridan Panthers at home for a Thursday night game Jan. 23. Joe Cima lead the Wildcats to victory with 15 points. Harrison kept Sheridan under 20 points until the final quarter. The Wildcats had one of their better scoring nights against the Panthers. Jackson Nye put up 13 points, and the Wildcats lit up the third quarter with three-pointers. They played strong defensively, limiting the Panthers to single-digit quarters. Harrison’s strong defense continued against the Trojans in Drummond Jan. 24. The Wildcats kept the Trojans under 10 points in the first half. Luke Cima kept the Cimas’ scoring game up in Joe’s absence in the second game. The Homner broth-ers contributed to both games with three-pointers, and Vern Homner lead the Wildcats in points against Drummond. The Wildcats have their next conference game against the Granite Prospectors in Phillips-burg Jan. 31.

Ennis girls had two victories on their home court. The Mustangs went up against conference rival, Twin Bridges Jan. 23. Ennis had a narrow lead throughout the game. Junior Landri Paladichuk was the driving force of the Mustangs’ success. She scored about half of Ennis’ points, blocked one of Twin Bridges’ final shots with 14 seconds left and scored the last points of the game. The Mustangs went on to defeat the Lone Peak Bighorns Jan. 25. Their free throw rate greatly improved from the last game. Ennis fell behind at the end of the first half, allowing Lone Peak to score 12 points in the second quarter. But they came back in the third quarter to a comfortable lead. Paladichuk led in points. Her focus from outside the arch was on. She made four three-pointers throughout the game. The Ennis Mustangs will travel to Lima to play the Bears Jan. 30.

Conference rivals met in Ennis. The Ennis Mustangs and Twin Bridges Falcons took the court Jan. 23. The Mustangs came out strong against the Falcons. The Falcons would make a small gain and the Mustangs would return to tie it up. Brand Ostler made the last play of the first quarter, scoring a three-pointer with the seconds counting down. The back and forth continued into the second quarter, with Ostler and Ennis junior Ian Swanson making most of the points. Twin Bridges ended the first half with a 12-point lead, but Ostler started the second half with a message – a three-pointer from the court’s deep corner. Twin Bridges did not score for over two minutes. Ostler drained five three-pointers against the Falcons. The Mustangs’ momentum faded in the second half, and the Falcons took off. Lone Peak came to Ennis Jan. 25. The Mustangs were behind the entire game but came back to beat the Bighorns. Swanson and Cordell Severeid let the baskets fly in the fourth quarter, each scoring nine points. The Mustangs made 14 three-pointers over the basketball weekend. Their strength in the offense leads the Mustangs to most of their success. But moments in the defense shone brightly, like Jaxson Kloote’s steal and drive to the net against the Falcons. The Mustangs will play the Bears in Lima Jan. 30.

Sheridan fell to conference competitors, the Harrison Wildcats, Jan. 23 The Thursday night game in Harrison was a tough one for the Panthers. The Sheridan boys had moments of success of the court. Kaiden Batzler, who lead the Panthers in points, was a strong offensive and defensive player against the Wildcats. Batzler put up 13 points and had seven defensive  rebounds.   The Panthers played the Granite Prospectors on Jan. 28 and will be in Ennis to take on the Mustangs Jan. 31.